Hamburgers and buns. What should  I say? I hate those spongy commercial made things that you can get from the supermarkets. If possible I will avoid them. While ago I found a really simple a good hamburger bun recipe which I tried and modified to fit my taste. I have made couple of variations of the basic recipe. Last one was with carrots. It was really good and I got from those buns also some really yummy lunch breads for Kiddo’s school lunch.

This time I used Turmenic in the dough combined with poppy seeds.  Turmeric has a peppery, warm and bitter flavor and a mild fragrance slightly reminiscent of orange and ginger, and while it is best known as one of the ingredients used to make curry, it also gives ballpark mustard its bright yellow color.Turmeric has long been used as a powerful anti-inflammatory in both the Chinese and Indian systems of medicine. Turmeric was traditionally called “Indian saffron” because of its deep yellow-orange color and has been used throughout history as a condiment, healing remedy and textile dye.

Here is a good article about benefits of Turmenic if you want read more about it ! 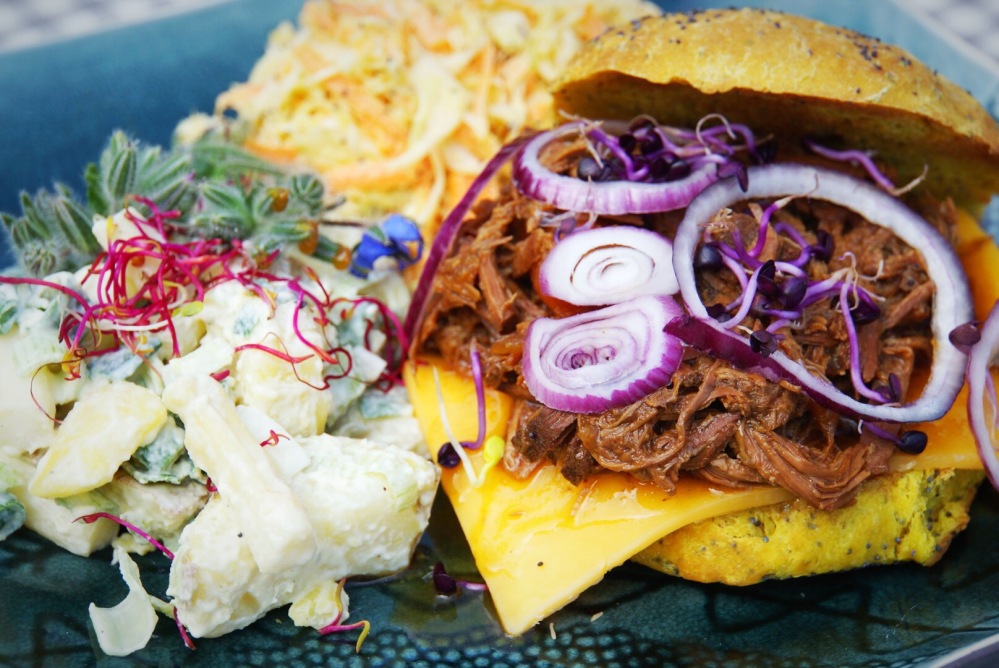 I made pulled beef to go with the Turmenic buns. Pulled beef was made with the same recipe as my pulled chicken is. I cooked shoulder piece about 20 hours in slow cooker. Result was really yummy. On side I served simple Cole Slaw and Potato-Asparagus salad. Sounds fancy but actually really simple stuff. Here is the recipe for the Turmenic Hamburger buns: